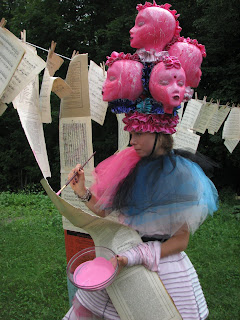 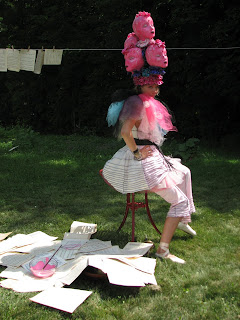 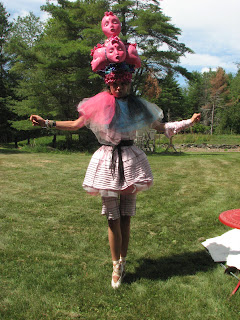 PINK HYDRA- refers to Lernaean Hydra the multiple headed serpent in Greek Mythology who guarded the underworld and was killed by Heracles. PINK HYDRA is also a guardian but she takes precautions against anything that would destroy her achievements and power. She hovers in a creative space between darkness and the light side of consciousness. She thrives in maintaining balance between the two forces. As she delves deeper into her dark side she discovers death hugs the edges of her existence. Unable to accept her destiny she tries to rid of Death by kicking it across the vessel from which it came. Losing against this futility overwhelms her. Impulsively she chops her head off in the hopes of immortality.
Posted by samtk at 10:25 PM

samtk
montpelier, vt, United States
Being an artist with intentions to probe life around me I frequently rub up against an archive of observations and experiences that enables research and experimentation. This exploration revolves around three intersecting constants IDENTITY, CULTURE and NATURE which are all in perfect alignment at any moment in time. I discovered that FASHION allows me to push these constants into conceptually driven projects, as a way to explore the transformations of identity from our cultural past and global culture. Fashion ‘s mutability opens up the potential to fuse fantasy and reality in provocative and POETIC ways. You could call my conceptual apparel anything but uniform, however my art is about transformation and its imprints on identity. Among many aspects clothes can be one’s weaponry to project power, while also expressing ways we harness our power close to the body. I like to play with what’s both expressive and repressive in human life, with materials that are rigid and flexible, by way of revealing and concealing the human figure.